Zones are the locations, cities, venues the regular gameplay of Dead Maze takes place in. Once you progress far enough in the game, you can access the map to travel between them at will from the bike. Each zone has 2 or more bikes; one where you spawn, and others elsewhere in the map (only for leaving).

A zone can host up to 50 players, if more players want to enter a zone, a new instance (called a substitute) is formed. Players from different instances of the same zone don't see each other on the zone chat and they can't meet in the zone, but if they form a group they can use that groups direction indicator to track each other down (and then if both relog, they'll probably end up at the same instance). When entering a zone, players enter the instance their groupmates are in.

A player's contents are unavailable to other players (so they can't be beaten to the punch). However, when a player drops an item, it is then immediately available to be picked up by anyone on the same instance of the zone - and near enough, because the characters only have a certain reach. Dropped items look just like loot bags, but they persist longer (5 minutes and you can relog or reenter to pick them up).

Once you inspect a depicted item or a container (even if you don't take anything from it) and depart from the zone, that item will be absent or that container will be empty on all your subsequent visits to any instance of that zone. Logging off or crashing out also counts as departing from the zone. All containers or items are replenished through the reset at 5am UTC , but you need to update the game through relogging or re-entering the zone if you want to take advantage of the reset in the zone you occupied when 5 UTC struck. Don't confuse the reset with a reboot, a reset doesn't disconnect players, and a reboot doesn't refresh the contents of containers (but it respawns bosses and mission characters).

All zones have a few secret passages which can be explored for better loot. Like anything else on the map, these containers can only be opened once a day and reset when other containers do (5 UTC).

When you drop a backpack when you die, a skull symbol will appear on the travel map next to the zone in which that happened to you. There are no further clues though so you have to remember the vicinity (bearing in mind that if you were lagged, your actual position may have differed from the one you perceived) in order to be able to retrieve it then. Backpacks stay in the place they were dropped in forever, until they get depleted, or replaced with a new dropped backpack (after dying again, because only the most recent backpack is available at any given time, even if empty, so be careful). If the backpack is in a periodically locked place like a secret passage, you may access it each time you manage to get in. The backpack will not empty after getting inspected. The skull symbol on the travel map persists even after you deplete your backpack. 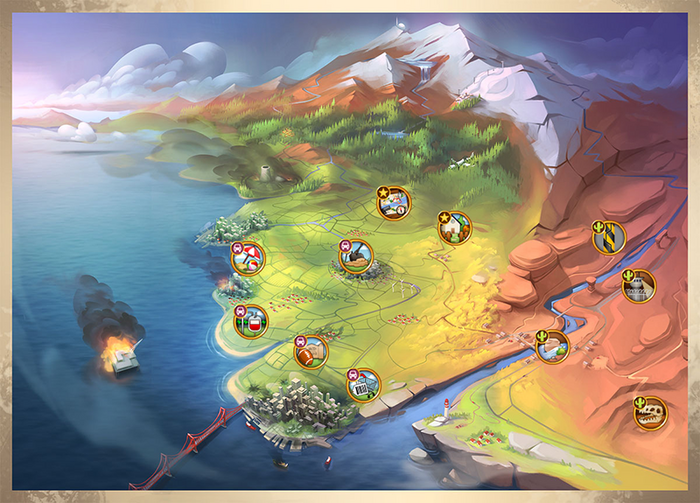 See the main page for a list of zones and quest descriptions.

These zones aren't normally accessible, either due to being removed, never added, or only being accessable under certain circumstances, such as a quest.

These can be found in the translation file around here.

Next few are around here.

Last few are scattered around