The Sacramento Suburbs is the first normal zone a player is introduced to after going through the intro zones. It has a high level of trashcans, safes, 2 gun bags, and more that keeps it interesting for new and old players alike.

The blueprints found here will unlock the storage (see page for locations).

Location: Go south-east to the base, then continue south past the truck with the flag on the hood.
Objective: Enter building, search table.

Ignore the code he tells you, it's not needed. Head east into the fenced area (recommended to bring a friend) and click the table with the computer on it in the top left of the building.

Location: Follow the river at center of map north along the west side until you find her on a wooden dock.
Objective: Talk near apple tree, salvage

Biscuits, which have a low chance to give chocolate. It is advised to find other chocolate giving sources such as

chocolate boxes, both of which can be found in vending machines as well as some set locations (it's worth leaving the area to find it and then restarting the quest when you have good chocolate giving items). Go north past Tiscornia park and northwest to the memorial statue. Talk to Sophie.

Location: On the long bridge at the eastern pond, just beyond Emmett's lab.
Objective: Salvage

Guitars you find, as they give both wood and rope. There are some set rope locations nearby: one is to the west, north of Emett's side quest building. Another is to the north east, in the house south of the pool, next to a desk (there is also a guitar in this house). There is also a rope along the northeast of the pond by Amber. Another rope can be found right beside one of the broken-down cars by the BiBi-Too Café (which is at the left of the gas station).

Location: Past the South District, adjacent the Sacramento Public Library on the northeastern side, next to a military truck.
Objective: Kill 20 infecteds. Go through library, talk to her at the south end of the lake. Kill 20 more infecteds.

Location: West of spawn, Colin Brown is hiding behind the large rock along the path next to the barn.
Objective: Kill 3

You can find pitchforks in the barn, or dropped from infecteds. You can also find farmer infecteds in the area.

Location: East of Spawn, in the survivor's burrow.
Objective: Deal

2000 fire damage to Infected, then travel to American River's Firecamp.

Location: On the north east side of map inside the gas station, along with her brother,

Map without icons (by Verdecon) 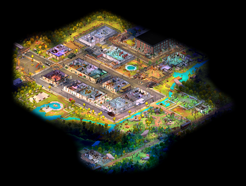 Map of Suburbs before being expanded in V0.35 (Image by Verdecon)