This article contains information on Dead Maze as was planned before the alpha phase of the game. Much has changed, but this article does not reflect this.

During the alpha phase, Dead Maze was planned to be playable in solo, coop and massively multiplayer. The aim was to explore the world and scavenge as many items as possible, to survive the hostile environment and bloodthirsty hordes of monsters.

Admins were still debating the economic model of the game, but it will probably be free to play[2] (while it was originally planned to be a paid game except for the first "zone"[3]).

It was first mentioned on the forums (as an unnamed game) on the same thread that announced the stopping of development of Celousco[4]. The first sneak peak was posted by Tigrounette on 1 April 2015[5]. It was then officially announced[6] a week later on the 7th with the name Deadmaze[7].

Around a week later, it was discovered they updated their societe.atelier801.com page for the game, which included a release date of September 2015. The domain deadmaze.com also started redirecting players to atelier801.com. They also officially released the name as "DeadMaze", and created a twitter: https://twitter.com/dead_maze. A facebook account has also been created: https://www.facebook.com/deadmaze. The game will also be available on steam[8]. On 6 July 2015, the first glimpse of deadmaze.com was available publicly for a short time before being taken down.

Despite the societe's page listing a release date of September 2015 (release date was removed around a month after September), this did not happen. However, the Dead Maze forums and Trello were released late September, hinting at the game's release/beta fast approaching.

The official Dead Maze forum was revealed on 30 September 2015[9]. Up until then information was either posted on the Atelier 801 announcement thread or posted off-site.

The purpose of the game is to pass through different area, each which can have weather conditions, diseases, new objects, and different monsters. The player has a small inventory, and objects will break as they are used, forcing players to survive on what's immediately at hand (water, food, weapons, items, etc). 90% of object in the world are interactive and usable, and the player will fight with everything and anything![1]

The first four areas are as follows[1]:

Each area with have it's own types of monsters, with some being "classic" horror movie ones for fun.[1]

Gameplay is simple, with the complexity being the variety of weapons (as well as their effects) combined with objects breaking and having to survive.

"The interest of the survival game is the feeling of permanent insecurity, which pushes the player to pick whatever he finds, and to move. The idea [of Dead Maze] is that the player is "locked" into a kind of labyrinth controlled by a "higher entity" which aims to test the player's survival skills by generating more or less hostile environments filled with more monsters or less dangerous. The player will have to discover it slowly particular via the artificiality precisely (and then it suits us well to various environments). Areas crossed by the player suddenly become increasingly hostile and difficult." - Tig (translated)

The story takes part during a zombie apocalypse, where people try to survive and find ways to live as best as they can.

The player-controlled character posesses a camp that allows him to meet his needs, stock items and feel safe. His goal is to improve and protect this base from zombie attacks. In order to do so, he must explore different areas in order to find elements that will allow him to improve his condition.

[11]When night falls you have to be even more careful to stay alive, as more zombies appear.

On a french forum Tig stated his inspiration for the game as follows[1]:

While the game is inspired by the above sources, there's also original concepts used in the game[1]:

Preview of the alpha version

Banner of a lone zombie in the dark 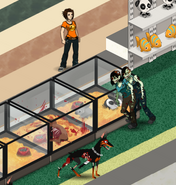 Sneak peak on Twitter, showing first glimpses of the character being customized, and a dog. 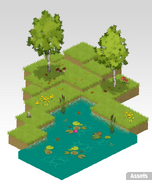 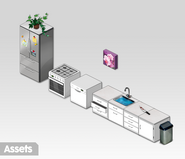 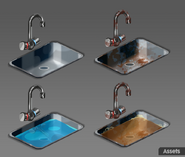 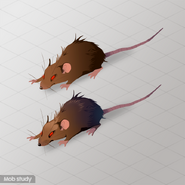 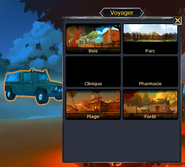