In this event, you must collect pumpkin tokens to trade to Will O' Wis in Lakeview. You can also talk to Will for fun dialog, as well as talk to Irving who is nearby, who will complain about Will.

This event was the first true holiday event in Dead Maze, having a special currency and prizes.

The event returned on 1 October 2019, consisting largely of the same content and yields the same rewards.

Pumpkin coins are a holiday currency use to buy things in Lakeview. The only way to check your pumpkin coin total is to trade Will and check the total at the bottom right of the window. It costs hunger to collect pumpkin coins, similar to collecting reputation coins from a drop.

Note: that Pumpkin coins can only be used in the Halloween event, make sure to use them up before the event ends.

Pumpkin coins can be obtained from multiple sources in the following quantities:

You can earn about 50 pumpkin a day easily if you loot everywhere possible. Making a party may increase the rate you get pumpkins. 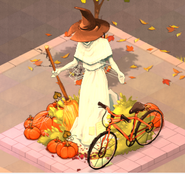 Teaser image sent by Noisette (Tigrounette) on the Dead Maze Discord before the event.

Image of Lakeview with Halloween decorations and red/orange filter.