Blue Mesa is the last desert zone, and it one of the more confusing ones due to a large number of dead ends, areas, and floors.

While not a secret passage or part of any achievement / storyline, a somewhat hidden area is the containment chamber on Floor -66. While it can be seen from the main floor -66 area along the north west wall, it cannot be entered directly. Instead, from floor -66 you must exit out the passage in the north east corner (do not go in the east passage way) and go up the ladder. Then work your way through the outdoors until you find the helipads. On the corner of the second helipad is an elevator tube which brings you back down to floor -66, this time inside the sealed off area. Follow the west path until you find the containment center.

The blueprints found here will unlock the research workshop (see page for locations). The blueprints look like a broken monitor and test tubes.

Map without icons (by Elrandira) 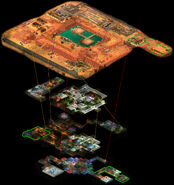 Map with locations (by Syrethyst)
Community content is available under CC-BY-SA unless otherwise noted.
Advertisement