Lakeview Lane is a zone that serves as the main base for the game's story, as well as a lobby/lounge where players can talk, trade, roleplay, start an expedition, look for groups, and more. It is unlocked early in the story during the quest A new Start at Chapter I: The search for Agon. [1]

18th Lakeview Lane. One of the last known bastions of humanity, located in North California, brings together those who survived the Apocalypse. The only condition to enter is to prove your immunity to the infecteds. If you can not justify any previous bite, you shall not pass. And surviving alone in a world filled with these merciless creatures would be a last stand for you.

It is an important place in Dead Maze in which you will return between each mission. This will be a good opportunity to prepare your next expeditions and to follow closely the evolution of the fight against the threat of the Infected.

Every community needs to have someone to make decisions and organize everything. It is Egon, creator of Lakeview who takes this primordial role. Following the mysterious disappearance of this ingenious chief, the intendant Wallace Abboth tries as much as he can to occupy all the abandoned administrative functions.

But Lakeview is not in the pay of one man. There are four factions working in unison, each with its own specialty. And it's Murphy Lane, a former combat-warred faction leader, who takes on the role of the operational chief coordinating everyone.

From the village gates you will face the Lakeview Guards. Although they are not a faction in their own, they still have a leader: Manuel Lopez. He and his men, mercenaries for the most part, will not fail to remind you of the main rule of the village: the one about the Excessive Noise to avoid attracting more Infected. And that's probably the only thing they will do for you.

For protection on a larger scale, the Shepherds take over. Their cattle are the infected. Their main mission is to redirect hordes that would threaten the village by installing dams and sound decoys. But they also secure the most dangerous areas for the other factions so they can take action. It is with Sekou Iwume, the leader of these impetuous risk-all, that you will be able to acquire additional weapons.

Most people who join Lakeview, and want to be helpful, choose to follow Henry Collins. The members of his faction, the Scavengers, are responsible for raking the areas in search of everything that is exploitable: food, weapons, materials. You will necessarily have to deal with him, at least until you prove your worth. In addition, he may also provide you with food at a cost.

Before any outside operation, it is necessary to identify the areas that are interesting to search and those that are too dangerous. This task is fulfilled by the Scouts of Mei Lee. The members of this faction, elitist and very closed, have their eyes and ears constantly on the lookout and know everything about their environment. It is with the leader of this over-equipped faction that you will be able to buy additional skills.

But all these maneuvers are not without danger, and survivors sometimes find themselves injured or even trapped on the ground. Lynn Durand’s Saviors are the ones who will come to the village and take care of you until you are ready to go back to work. It is also Lynn, based in her infirmary, who will sell you various buildings for your camp.

It would be unwise to rely on one single source of food. This is why, concurrently with Scavengers’ work, Lakeview has its own agriculture in which the pure water of the lake plays an important role. Vegetables, cereals and other farm products therefore constitute part of the food supplementing those brought from outside.

Finally, Lakeview will also serve as a base from which you can start more difficult missions. The Adventures and Expeditions will send you and your friends to new areas to perform way more difficult special quests. You can undertake one of them via the operating table located next to Murphy Lane. As a result of these operations you will be rewarded with the necessary currencies to buy what you need from the faction leaders. 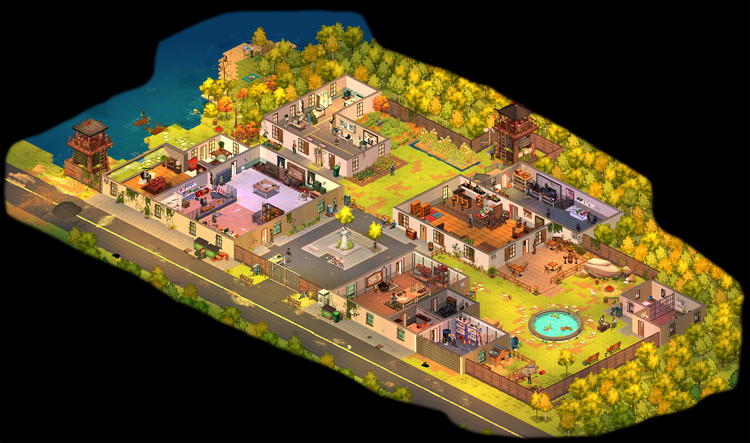 Western watchtower
Add a photo to this gallery

Retrieved from "https://deadmaze.fandom.com/wiki/18th,_Lakeview_Lane?oldid=21679"
Community content is available under CC-BY-SA unless otherwise noted.